On 9 August 2015, BioAg and some of our customers were featured in a segment on ABC Television’s program Landline, titled ‘Organic Passions’.

PIP COURTNEY, PRESENTER: When Australia’s first organic farm began operating more than 50 years ago, many producers were highly sceptical. But today, the Australian organic food industry is worth more than half a billion dollars a year at the farm gate. As Sean Murphy reports, many organic practices are catching on, with a growing number of conventional farmers now using natural trace elements and biological fertilisers certified for organic use.

SEAN MURPHY, REPORTER: He’s the godfather of organic farming in Australia and his farm is proof that broadacre cropping and livestock production can work without synthetic chemicals. Alan Druce is now 86 years old, but he’s lost none of his passion for farming.

ALAN DRUCE, GREEN GROVE, KAMARAH: I’m excited. I’m happy because I think we’re onto a – onto the knowledge of how to offer a service to our fellow man. That excites me.

SEAN MURPHY: Alan Druce runs a typical mixed farm with sheep, cattle and crops at Green Grove near Ardlethan in New South Wales. But what makes him unusual is that he converted his 1,100 hectares to organic principles in 1962.

ALAN DRUCE: We don’t use poisonous chemicals. They’re getting into the food chain, but I think what is more serious, they are killing the soil biology. I think it’s incredibly sad. I think that monoculture, using these chemicals big time is going to turn those farms into desert. But I don’t have scientific proof for that; I just think it’s happening. And the health of our nation, the people’s health is deteriorating so dramatically that doctors cannot keep up with the increasing workload. … And the secret of good health in human beings is to have a good, right, healthy balance of the ecology that’s in the soil. It’s not just dirt. And the same with the animals. You might have noticed the animals look pretty healthy – fat, big, strong and things like that. It’s because they’re getting the right balance of essential nutrients too. And so when we eat lamb or beef, we get a lot of the nutrients from them.

ANDREW TAYLOR, GLEN IRIS, KAMARAH: We still do like a traditional fallow, plough in the spring and then cultivate up until sowing to get weed control. We’re not using artificial fertilisers and things like that, so we’re all natural fertilisers and foliar sprays.

SEAN MURPHY: One of those fertilisers is a biological plant food known as Converte, which they spray on crops about six weeks after sowing.

ANDREW TAYLOR: In field trials, we’ve got some really good results over the years.

SEAN MURPHY: What sort of results?

ANDREW TAYLOR: You always get a yield increase and then a better quality, like a cent to – a per cent and a half in higher protein. And in a wet year where you get a lot of rain at harvest time, it takes the weather a lot better, it doesn’t damage from the weather. The last year in this area, there was a lot of frost damage, and with using Converte, we don’t seem to get the frost damage. We didn’t have any frost damage show up in our wheat crops last year.

SEAN MURPHY: Neil and Gina Wiseman are more recent converts to organic farming and free-range eggs are the latest addition to the organic system they started 16 years ago.

NEIL WISEMAN, WISEMAN’S FARM, COLEAMBALLY: We have the sheds and we have the chickens confined to a 500 square metre area around the sheds so that we get the egg production off them, but then later in the day, they’re let go to range as far as they wish. And then those pens are shifted every day. Building soil is the name of the game and I see the chickens as the next step in building the soil.

SEAN MURPHY: Their 600-hectare irrigated farm mostly grows soybeans and a range of vegetables. They were once typical conventional farmers.

NEIL WISEMAN: We were pushing out, say, on a 500-acre farm, 1,000 tonne of corn a year and 300 or 400 tonne of wheat plus a couple hundred tonne of soybeans. And we were using heaps of fertiliser and what have you to maintain that. It was just – we just ran into problems. Things like rhizoctonia and other disease problems and we were just looking for alternatives.

SEAN MURPHY: Key to going organic and not going broke was understanding what natural products they could use to build their soil.

NEIL WISEMAN: We found rock phosphate, we found we could use lime, we can use gypsum, we switched green manures instead of trying to add nitrogen; we’re trying to build the soil up with green manures. So it was quite a transition and quite a mindset change.

SEAN MURPHY: After some hard years, they’ve revitalised some of their worst soil types and are now in the process of buying more land and water. Their 32-year-old son Luke has returned from a career in construction in China to help expand the business. This is a trial crop?

LUKE WISEMAN, WISEMAN’S FARM, COLEAMBALLY: Yes. What we’ve done, last year we did a very small area and we decided that, yes, we can grow potatoes in the heavier clay. Our carbon levels allowed us to do that and they come out quite clean, as you can see. So, um, that gave us the hope that, yes, we’d be able to get them out and be able to market them and we went from there and we’ve increased to about a hectare and a half here, which is still quite small, but enough to give us a realistic idea of doing this on a commercial scale.

SEAN MURPHY: Using rock phosphate, magnesium and other trace elements as well as biological fertilisers makes sense for farms with organic certification. But increasingly, conventional farmers are also using them on their soils and crops.

ANTON BARTON, BIOAG: About 98 per cent of our production goes to conventional farmers, from graziers to broadacre croppers to row croppers to horticulture.

SEAN MURPHY: Anton Barton says his company is so confident in the take-up of biological products it’s invested $5 million in a production plant near Narrandera in NSW.

SEAN MURPHY: Bioag plans to double production in the next five years, with more farmers seeking a way to stimulate their soil biology.

SEAN MURPHY: Drew Vidler runs a conventional 1,600-hectare farm in Corobimilla in NSW with his son, Jock. They’ve been using Bioag’s inputs for 15 years alongside their artificial fertilisers and sprays. In some cases, they even mix biologicals with chemicals and deliver them in the same spray.

DREW VIDLER, CORO, COROBIMILLA: We seem to be getting reasonable results over the years. I wouldn’t say we’re saving money. No, we’re probably spending money upfront, but I think we’re getting the results in the improvement in the soil conditions.
SEAN MURPHY: At Darlington Point in the Murrumbidgee Irrigation Area, the Commins family run one of the biggest private cotton growing enterprises. They’ve been using the Bioag products for 15 years.

GEORGE COMMINS, COMMINS FARM, DARLINGTON POINT: As we go forward into the future, we need to become more and more economically and environmentally aware of what’s happening between – in our soils. As we see it, we can’t keep pouring on these synthetic fertilisers like we have been in the past. All our inputs are going up. We need to somehow keep control of that and harness what we already have in the soil. And through the use and trial of these microbial products, we’ve been able to do it.

SEAN MURPHY: George Commins has been conducting on-farm trials for the last four years, averaging a bale of cotton extra per hectare. Bioag has also been building up its own peer-reviewed scientific evidence.

ANTON BARTON: We’ve got a heap of trial – we’ve got independent trial work, replicated trial work from America, where we’ve been the last couple of years doing work with a research company called Agricenter International, where we did trials on corn, soybeans and cotton and we’ve just committed to a third year of those trials. They’re independent, replicated, peer-reviewed, statistically significant and our yield responses have been by and large between 20 and 30 per cent over and above standard practice. And a lot of those replicates, we actually had a 15 per cent reduction in nitrogen, so, we’re definitely getting international recognition from that.

SEAN MURPHY: For some farmers, like brothers Dennis and Rodney Irvin, using biological fertilisers has boosted production and cut costs. At historic Barallen Station, the brothers have been using the liquid plant food Converte on their 1,800 hectares of pasture and cropping.

DENNIS IRVIN, BARALLEN STATION: Well on me lucerne, the stock probably eat 80 per cent where it has been. It took me a little while to realise that. I thought there wasn’t a big change in the lucerne until I started taking notice of where the stock were eating and it was – all the time they were eating where the fertiliser had been, the liquid fertiliser.

SEAN MURPHY: And have you noticed any change in the health of the sheep?

DENNIS IRVIN: Yeah, I believe the rams have probably – are averaging 10 to 15 kilos extra with no changes. So, to me, it’s obvious they’re getting more minerals and nutrients and things from – the micro organisms are obviously making a big difference there.

SEAN MURPHY: After just three years, the Irvins have cut their chemical fertilisers and sprays by 40 per cent and are now hosting independent trials by the Canberra-based research company Australian Soils.

DENNIS IRVIN: For me to just realise what’s going on, how and why and – well, I wasn’t convinced, to be honest with ya, for 12 months, like, I took a lot of convincing. And I seen the differences and I just wanted to find out how and why.

SEAN MURPHY: The trials showed a huge spike in microbial activity after the first year of application, as well as increases in available trace elements such as phosphorous, nitrogen and magnesium. Converte’s Mark Vereker says the trial will run for at least four years to provide more solid evidence.

MARK VEREKER, CONVERTE: Well it’s important because most farmers actually want to see that sort of evidence, you know? I mean, they’ve got a lot of money tied up in their fertiliser and we understand that. We don’t tell them not to use their conventional fertiliser. We tell them to cut it back, and then, when they use the Converte, they can cut back on their fertiliser, the conventional fertiliser, a little bit more each year.

SEAN MURPHY: Four years ago, Green Grove was on the market, but since then, Alan Druce has had a change of heart. Soaring organic wheat prices have been a factor, but more so his desire to protect his farm and continue to sell what he believes is more healthy and nutritious food.

ALAN DRUCE: If indeed this farm is growing food that is unbelievably high in these essential nutrients, it seemed to me a backward step to sell it to maybe someone who would go back to farming it conventionally. I think if you had a conventional farmer come on here he would grow spectacular crops for a while. But, if we have food that is very high in these essential nutrients, I’d like to make it available to any and everyone that’s interested

Read how all kinds of farmers have benefited from a BioAg program. 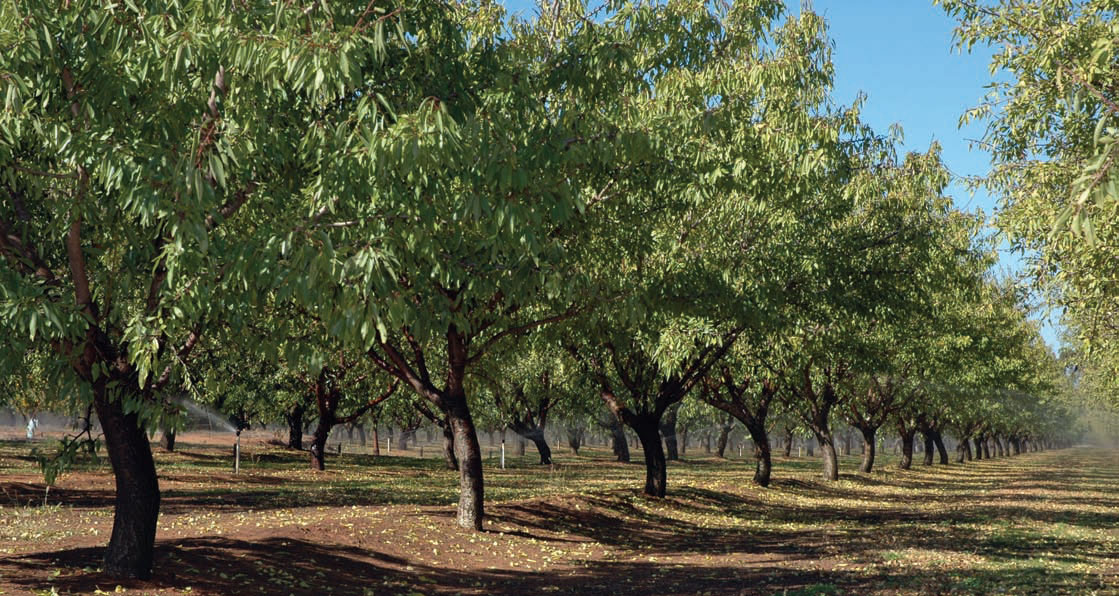 Talk to one of our agronomists

Receive our news and updates