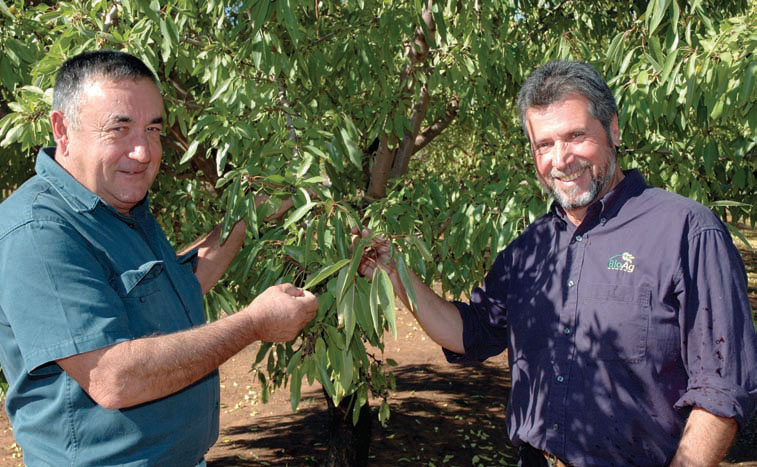 The adoption of a biological nutrition program three years ago has rejuvenated 2,900 almond trees that were languishing under the ill-effects of a high input management system.

Red Cliffs district almond grower, Barry Hensgen, began applying a high-input fertiliser program across his two blocks on the advice of a consultant several years ago. “This program aimed to achieve a yield of about 3.1 tonnes kernel per ha, which was about 30 percent higher yields than the industry average,” he said.

“The basic idea was that the more we fed our trees, the higher our yield. This seemed logical to us, and sheep-like, we put on more and more fertiliser, far more than we had ever used in our lives.

“We never got the extra yield but we could see our trees declining – in fact, they were dying, particularly the mature trees on our second block. Those trees were only half-way through their productive life yet they looked like they had reached their use-by date.

“The leaves were burnt at the tips, the branches were defoliated and they generally looked sick. I didn’t know what to do but I knew I had to find an alternative.”

Barry contacted a local agronomist who had a well-developed interest in biological nutrition. He inspected the trees and concluded that they weren’t dying as much as being poisoned by over-fertilisation.

“Marco said we were literally killing our trees with goodness,” Barry said. “We were putting on so much nitrogen and other nutrients that our soils had become toxic. His advice was to apply vitamins and microbial cultures to restore the microbial activity in the soil.

“This seemed like a strange solution to us, but we knew if we stayed on the path we were on, we weren’t going to have any trees to worry about. We decided to bite the bullet, stopped the old program and started a biological approach.”

The solid nutrients are applied using a belt spreader between the tree rows.

In addition, 1 – 1.5 L/ha* of BioAg Soil & Seed™ and 15 – 25 kg/ha* of calcium nitrate (a rich source of calcium and nitrogen) is applied at 21-day intervals throughout the growing season via the fertigation system.

During early flowering and fruiting, 1.5 – 2.5 L/ha* of BioAg Balance & Grow® mixed with small amounts of calcium nitrate and micronutrients as needed, is applied as a foliar spray at 21-day intervals.

Download PDF (560Kb)
Talk to one of our agronomists

Products featured in this case study

BioAgPhos
BioAgPhos is at the core of BioAg’s solid fertiliser range and comprises reactive phosphate rock that has been treated with a proprietary microbial culture.

Receive our news and updates